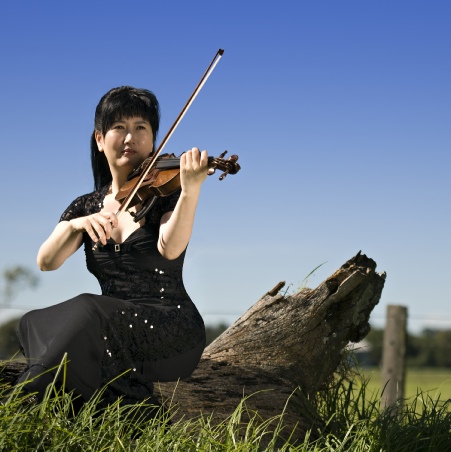 Dr Sohyun Eastham started playing the violin when she was four years old, with Dr Suzuki's Method. In her teen years she entered many competitions, and won many national violin competitions. She won government scholarships to study tertiary education, and graduated with a Bachelor of Education (Music) from Sam Yook University in Seoul, Korea in 1993.

Sohyun came to Australia for further study in 1994 and met Janet Davies at the Sydney Conservatorium and studied with her for one year. This led Sohyun to study with distinguished violin teacher, Elizabeth Holowell. She gained a Bachelor of Music degree with Honours in performance and research (Mozart's Violin Concertos) in 1998 at the University of Newcastle, under the supervision of Prof. Robert Constable. She joined the staff of the University of Newcastle Conservatorium in 2000.

Sohyun began a Master of Creative Arts (Music) programme in 1999 at the University of Newcastle, and this was upgraded to a PhD. programme in 2000 under the supervision of Assoc. Prof. Michael Ewans and Elizabeth Holowell. In 2007 she was awarded the degree of Doctor of Philosophy.

The title of the thesis is "The Role of the Violin in Expressing the Musical Ideas of the Romantic Period and the Development of Violin Techniques in the 19th and Early 20th Centuries."

Five live recordings were produced to fulfil the creative part of her doctoral study. These included: the complete Brahms's violin sonatas, and various works from Schumann, Schubert, Prokofiev, Ravel, Saint-Saëns, Kreisler, Tchaikovsky, among others. One of the highlights of her programme was a performance of Beethoven's Trio with Anthea Scott-Mitchell.

Dr Eastham has performed at various major events as a soloist, chamber musician and orchestra leader in Seoul, Auckland, Canberra, Sydney and Melbourne, Perth, Brisbane as well as many other locations. She is the director of the chamber orchestra and has coordinated the string programme at Avondale College from 1999, and is still a Sessional Lecturer there. She was a member of the Hunter Symphony Orchestra from 1997 to 2000. Currently Dr Eastham is teaching at the University of Newcastle - School of Drama, Fine Art and Music. Several of her students have gained AMusA and LMusA diplomas, and many others currently hold scholarships.

In 2009 Dr Eastham published her first book The Violin and Romanticism. In this book she investigates the violin technique and styles used in the Romantic Period as well as the writings of over 20 treatises from writers of the period.

Released in September 2011 is her violin album Gentle Whisper recorded with Psalter. Sohyun has also recently finished recording her second CD - Journey of the Spirit. This album has music composed by Colin Spiers and was released in August 2012.